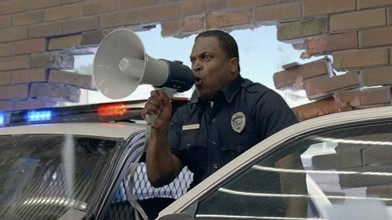 While the product on the field is the reason most people in America think of Super Bowl Sunday as an official holiday, the commercials are an annually strong hook for non-sports fans. Every year, marketing agencies use the largest television audience of the year—and often, their largest budgets of their year—to create something wholly memorable for their clients. As a marketer, it’s the type of scenario about which some of us dream.

This year was no different. Here are five spots from Super Bowl XLVII we loved, in no particular order:

Oreo had the best spot early on in the game, with this spot that begins as a heated—but whispered—library debate about what part of the Oreo is better, the crunchy cookie outside or the creamy inside. As the fighting continues to hilariously escalate, two constants remain: Whispering, and the constant presence of the titular question. That’s very creative brand recognition, and an entertaining spot to boot.

At two minutes, this spot from Chrysler/Dodge was the longest of the night, but you’d never notice by watching it. Set to the late Paul Harvey’s “So God Made A Farmer” speech and featuring moving, impactful imagery from farmer after farmer, it was by far the most artistic, cinematic Super Bowl commercial in a long time, maybe ever. Sometimes it’s hard to forget that while, yes, we are marketers trying to get customers to pay attention to brands, there is an artistic element to it and when executed perfectly, it can be a beautiful thing.

Anyone who’s been watching the excellent NBC sitcom Parks and Recreation over the past five years knows that Amy Poehler is the total package: Extremely talented as writer and performer, uproariously funny in everything she does, personable, beautiful. She is just the coolest. So seeing her show up in a Best Buy ad asking ridiculous question after ridiculous question about their inventory was a treat. While Best Buy hopes it’ll reignite interest in their brand, here’s hoping it also ignites interest in Poehler as the funniest woman in America.

Brands like Tide present a special challenge to marketers: How do we promote an unsexy, everyday item like laundry detergent in an interesting, creative way? This spot nailed it. A 49ers fan spills salsa on his Joe Montana jersey, with the stain closely resembling the face of the Niners’ legendary quarterback. Not unlike people seeing the face of Jesus in pieces of toast or beer cases, this becomes a national phenomenon, with news coverage, viral photos and people coming from all around the world to see the miracle stain in person. Then, the unexpected twist: The man’s wife, a Ravens fan, takes the jersey out of its new frame, washes it with Tide and eradicates the stain. Nicely done.

Mercedes-Benz went all out with their ad for their new, moderately priced CLA model out in September. An ordinary man spots the car’s image being placed on a billboard—immediate brand recognition, not to mention adception—and it’s revealed that he’s on the cusp of making a deal with the devil, played by Willem Dafoe, to get the car. From there, a montage of what the man imagines he will receive if he signs—set to “Sympathy for the Devil” by the Rolling Stones, natch—unfolds: The cover of Vanity Fair and other magazines. A victorious dance-off with Usher. A date with model Kate Upton. It all seems perfect, until the camera returns to the man’s meeting with the Devil, looks out the window at the billboard and sees the workers place the last (and most important) bit of advertising on the board: the price. “Thanks, but I think I got this.”