To raise visibility and awareness for an uniquely Philadelphian art project while securing interesting submissions that will eventually be a permanent part of the installation.

Matthew Alden Price and Won Kyoung Lee have created a piece of artwork – a 20-foot-long shadow box packed with found and fabricated objects, each a pocket-size artifact of life in this city – is destined for Philadelphia International Airport’s Terminal F, and will be part of the city’s permanent public art collection, by way of their project My Philadelphia Story. 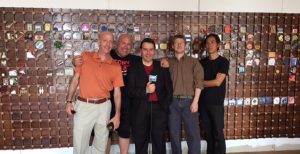 Price said that when he and Lee made their proposal, they were determined to create something that would deeply engage weary, stranded travelers.

“We used to fly back and forth to Korea every six to eight weeks. We each used to travel 100,000 miles a year. We were always stuck in airports,” he said. (Their record: 40 hours, at O’Hare.) “So, we wanted to create something that connects the citizens here to the travelers, and would give the travelers something to do.”

“It’s a portrait of Philadelphia at a specific moment in time,” said Jacque Liu, the city’s Percent for Art project manager.

“We’ve had generic objects that told really great stories, objects that are handmade, and things that have been collected over many years,” Price said. “It was the most humbling experience to have people share these stories and these amazing objects.”. 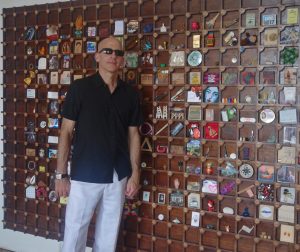 I was able to secure Philadelphia Flyers Hall of Famer, Brian Propp to give an autographed puck and appear in a promotional video as well as Philadelphia Eagles Pro Bowl kicker, Cody Parkey, who donated one of his cleats that he wore in the Pro Bowl, I also got James Beard Award winning chef Marc Vetri, owner of 14 restaurants and Reality TV star and Cheese Steak impresario to contribute items and appear in videos as well. The resulting publicity resulted in WPHL17 featuring the project on their morning show, The Eye Opener.

Then the submissions started arriving. A man named Tony Chunn sent a red string laced through seven keys, one from each place he’d lived. “After 65 years of collecting,” he wrote, “your project has made me realize how happy I am to be home.”

Other items showed up in the mail, and in a drop box outside Price’s studio: lockets and dice, origami and tools, pens and toys, and spools of thread.