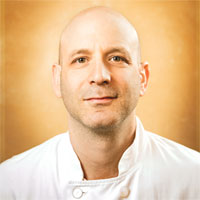 Chef Marc Vetri is known as one of the best Italian chefs in America (at least according to Bobby Flay). He won a 2005 James Beard Award as Best Chef Mid-Atlantic, and all three of his restaurants have been listed as top restaurants in the country. Yet a little known fact – the guy can rip it on guitar.

Before he got immersed in culinary art, Vetri had dreams of being a rock star. While he pursued his dream, he ended up working nights as a cook to pay the bills. Turns out, he was born to cook. Still rooted in music, Vetri turned to us to help promote an event he was doing with Phil Roy. “Sounds Good, Tastes Good” was held at Del Posto, NYC’s only 4-star Italian restaurant. Participating alongside Vetri and Roy were Joe Bastianich (MasterChef co-host), Tom Colicchio (Colicchio & Sons, Top Chef), and John Pizzarelli.

Our work on that project as well as Vetri’s non-profit Dream Camp initiative built strong ties between us. It’s ultimately the reason Vetri hired us to manage and redesign the Vetri Family web site.