It’s been a whirlwind first half of 2018 and, yes we’ve been quiet up until now, but that hardly means we haven’t been busy. In fact, as we approach the second half of 2018, this has been Hashtag Multimedia’s busiest in years. In other words: We’re back, baby.

Hashtag’s roots have always been in sports. We’ve been working closely with professional athletes for decades, securing endorsements, promotional opportunities in traditional and new media, and most importantly, bolstering their charitable endeavors. Our partnership with three-time Pro Bowler Tennessee Titans defensive tackle Jurrell Casey is no exception. Together with his wife Ryann, we’ve been diligently working behind the scenes to augment the presence of their foundation, The Casey Fund, through appearances, videos and other promotions. Jurrell took two busloads full of children from four middle school groups for students impacted by incarceration—McKissack, Wright, Jere Baxter, and Joelton—on a field trip from Nashville to the Muhammad Ali Museum in Louisville and spent another day talking to and playing hoops with the kids from The Boys & Girls Club of Columbia in Tennessee. We shot the first two episodes of a new webseries Jurrell is co-hosting entitled The Ashton Advantage with his sponsor, the World’s #2 ReMax realtor, Gary Ashton.

Being Philly guys, though, we bleed green. The Philadelphia Eagles’ march to their first-ever Super Bowl victory has opened up scores of opportunities for the players, and we’ve been lucky enough to be along for the ride setting up appearances for Nelson Agholor, Brandon Brooks, Trey Burton, Corey Clement, Jalen Mills, and Stefen Wisniewski just to name a few, through our established relationships with Philly institutions such as Modell’s, Forman Mills and DiBruno Bros. We organized a pep rally in the Italian Market prior to the big game with Eagles legends David Akers, Bill Bergey and Irving Fryar, in conjunction with DiBruno Bros. and benefiting the St. James School. Noted cheesemonger Emilio Mignucci loved hearing Bergey’s stories as much as educating him on the vagaries of cheese for 30 minutes while TV crews from FOX, 6ABC and NBC 10 looked on. 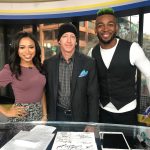 With Alex Holley and Jalen Mills on Good Day Philadelphia. 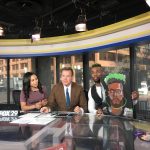 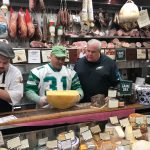 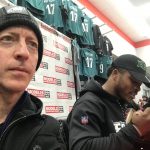 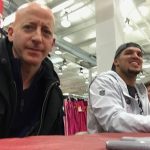 90 minutes after the parade, with Trey Burton at Forman Mills.

It’s been fun. You could almost say it’s been…Philly Special. In fact, two-thirds of the participants in the most famous play in Philadelphia sports history, Burton and Clement, were immediately off to packed appearances hours after the parade ended, as you can see below. Jalen made an appearance at the Aquatic and Fitness Center in front of 400 people, raising money for CHOP. Then there was the Children’s Hospital original art auction donated by local artist Saeed Briscoe featured on FOX Good Day Philadelphia. Be on the lookout for more from the Birds and from us as the offseason continues and as we roll into the season this fall.

As if that weren’t enough, we’ve dipped our toes into the fashion world designing a new logo for the Main Line institution Stupp Luxury Fashion, augmenting their social media presence and re-imagining their website; one of our newest clients, Lady Lifters, is reinventing how women are empowered through inclusive exercise and it’s seriously inspiring. They garnered over 20,000 views on the video we produced in the first week of its posting. It’s been fun and quite the wild ride. It feels great. Creativity is at the heart of what we do, and we don’t take our ability and luck for granted. We worked with celebrity chef Robert Irvine on his charity event Beats n’ Eats held at The Fillmore, scoring The Godfather of Gangsta Rap Schoolly D and West Philly native Chill Moody with the headliner slots. Chill was featured on Fox Good Day with Irvine earlier in the day to promote the event and Schoolly even created a piece of original art for the auction.

Saving the best for last, we are helping the Radnor based nonprofit Help Hope Live celebrate their 35th anniversary and bringing much needed awareness to what they do all across the country, which is provide families in medical crisis much-needed funds and hope to overcome their obstacles in care. We launched the campaign June 18 with the release of a video that featured James Beard Award winners Marc Vetri and Jeff Michaud; celebrity chefs Robert Irvine, Jen Carroll and Beau MacMillan; Philadelphia Music Ambassador Chill Moody; Mr. Invincible himself Vince Papale; WOGL Morning host Marilyn Russell and of course their new spokesman, Stefen Wisniewski who was on hand to meet some Help Hope Live clients and staff posing with his beautiful new Super Bowl ring which along with his pep talk energized the staffers. The cast of Good Morning America even appeared in the video which has garnered over 15,000 views on YouTube.