How the NCAA Tournament creates March Madness on social media

One of the best sporting events of the year is upon us: The NCAA men’s basketball tournament. With the field expanded to 68 teams, the tourney actually started yesterday with the first round of play-in games; tonight, the next round of play-in games happen, including La Salle taking on Boise St. La Salle, receiving an at-large bid and a #13 seed in the West region, is one of three Philadelphia-area schools playing in the tournament: Villanova, out of the Big East, received an at-large bid and the #9 seed in the South region; they’ll take on #8 North Carolina Friday night. Temple, also out of the A-10, grabbed the #9 seed in the East region; they’ll face #8 North Carolina State on Friday afternoon.

With a large field of teams and a full slate of games on Thursday and Friday afternoon, the social media participation from fans will be massive—and the productivity in American offices will be lacking as a result. According to a study by the outplacement company Challenger, Gray and Christmas, roughly one-third of American workers plan to spend three hours or more watching tournament action on the clock:

With the first round of the 2013 NCAA Division 1 men’s basketball championship tournament set to tip off next week, the nation’s employers should be readying themselves for the inevitable drop in productivity that coincides.  One new survey found that nearly one-third of workers spend at least three hours per day following the Tournament during work hours.

In the annual “study” hated by working basketball fans everywhere, global outplacement firm Challenger, Gray & Christmas, Inc., estimates that March Madness will cost American companies at least $134 million in “lost wages” over the first two days of the Tournament, as an estimated 3.0 million employees spend one to three hours following the basketball games instead of working.

Raise your hand if you also panic whenever you see this.

One can be sure that while productivity in offices across the country grinds to a screeching halt, social media activity will increase. The NCAA takes full advantage of this, making their product—the tournament—as accessible as possible. Cable TV subscribers will be able to watch all the games live from their computers with March Madness Live (smell ya later, productivity) and they’ll be posting real-time instant replays on their twitter feed. It’s a twitter innovation intended to spark interest from lucrative advertisers, and as long as the system doesn’t crash and we aren’t subjected to the dreaded fail whale, it’s going to work quite well.

Speaking of twitter, the folks behind the @marchmadness handle are doing everything right: Regularly posted, punchy updates as the games are happening, eloquent use of hashtags, photos, and most importantly, it’s all focused and pertinent info. That social media strategy, even for a product like the NCAA Tournament that essentially sells itself, is a boon for March Madness and should foster a strong community of college basketball fans rather easily.

Even as twitter has become more ubiquitous, it’s alarming how many companies don’t know how to fit their message in 140 characters or less. Expertly crafted tweets always win over bad grammar, poor information and lack of focus. Always.

Facebook got in on the fun, too. Using their seemingly endless swath of user data, they created a selection of fandom maps broken down county by county, based on users’ likes on team’s Facebook fan pages. There are fascinating maps broken down by conference, matchup and other factors, but the most comprehensive one is below: 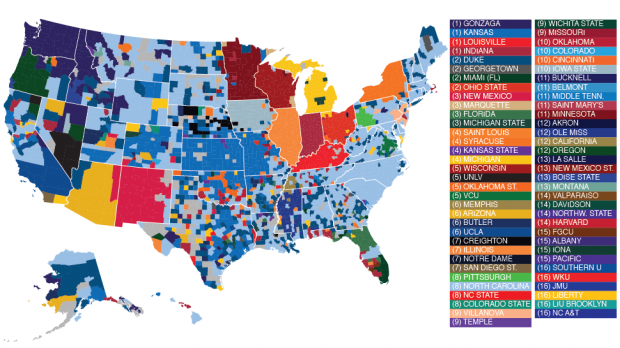 While Facebook lacks the immediacy of a social microblogging service like twitter, you can be sure users will be interacting with friends and other fans via these fan pages as the tournament games get underway. Hell, using this data there’s almost no doubt a business will market to said users.

Have fun tearing up your brackets!