Score for the Cure

Whether it’s 18 holes at a top-notch country club or a mini-golf challenge in Center City, if it benefits charity then Jon Runyan is likely to give it a shot.

Beginning in 2005, the “Score for the Cure” celebrity golf outing was an annual fundraiser in support of prostate cancer research. Nearly $1 million was raised for Kimmel Cancer Center at Jefferson Hospital and the Cancer Institute of New Jersey in the 6 years the event was held. 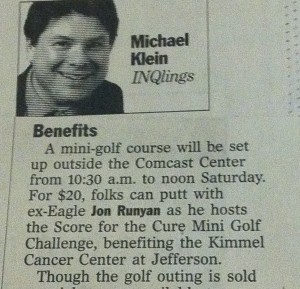 The Ramblewood Country Club played host each year, graciously donating their space as a gorgeous backdrop for the charity event. Hashtag Multimedia President Craig Kaplan oversaw every facet of the event, from conception to sponsorship sales to promotion. As seen on the right, the event drew news coverage each year in Michael Klein’s section on happenings around Philadelphia as well as in a variety of other news media.

(*Note – the above video is not created by Hashtag Multimedia)