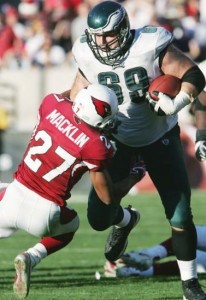 A rare touch of the ball for lineman Jon Runyan, about to plow over a Cardinal.

Many kids dream of being a pro football player when they grow up. But how many yearn to play as an offensive lineman? It’s certainly not like being a wide receiver or running back or quarterback, who receive the bulk of the attention after a win. Only when something goes wrong — a penalty, a sack, a missed block — is the o-line mentioned.

Eagles Pro Bowl tackle Jon Runyan agrees. During the Eagles’ Super Bowl run in 2005, he said in The Inquirer:

“That is the whole thing about playing offensive line, you never get respect. Nobody wants to talk about you until you screw something up.”

To combat this, he and Hashtag Multimedia President Craig Kaplan created “Meet the Blockers” t-shirts that were distributed to all the offensive linemen, tight ends and fullbacks on the team.

Perhaps the slogan is an obvious play on words with the first movie sequel of a certain Stiller-DeNiro comedy franchise. Regardless of origin, the idea worked. Team coverage heated up as they neared the Super Bowl, and Runyan noticed his fellow blockers getting more camera time. “They are doing more radio and televisions shows. It just isn’t the quarterback. Now, everybody does it so your name gets out there more.”

More camera time meant the t-shirt was getting seen. The shirt was eventually distributed to sporting-goods stores, with a cut of the proceeds benefitting former Eagle guard Jermane Mayberry’s eye-mobile charity.