How La Salle, Tyrone Garland and #southwestphillyfloater took the internet by storm

It’s been a trying year for Philadelphia sports fans. The Eagles finished 4-12 last year and look to be retooling. The Flyers have a chance to make the Stanley Cup playoffs, but are on the outside looking in right now. There’s optimism around how the Phillies will do in 2013, but the NL East is only getting tougher. The 76ers and Andrew Bynum are, to put it lightly, an extremely sore subject.

Men’s college basketball is perhaps the most rock solid sports institution Philly has. In a lot of ways, it’s what separates us from New York City and Washington, DC, two cities that cause that wretched inferiority complex so many outsiders claim Philadelphians have. The Big 5—Villanova, St. Joseph’s, Penn, Temple and La Salle—play each other every year for bragging rights in an unofficial round robin tournament. Each team has, at one time or another, found success in the NCAA tournament. This year, it’s the La Salle Explorers who are capturing the hearts and minds with their current run in March Madness and one southwest Philly kid named Tyrone Garland who’s become the breakout star.

As with any popular communal event in 2013, the braintrust behind NCAA Tournament has fully embraced social media. It’s a great plan, but it doesn’t account for virality, which really isn’t something anyone can account for. It’s something companies like ours have been trying to manufacture for years, pretty much ever since YouTube became a thing, but one never really knows what is or isn’t going to go viral; as a marketer, you just have to formulate the best plan possible and hope that it works.

On that note, there’s no accounting for what happened when Garland hit the game-winning shot against Ole Miss over the weekend to move the Explorers, a 13 seed, into the Sweet Sixteen:

Boom. Virality. Within minutes, #southwestphillyfloater was trending on twitter not just in Philly, but nationwide. In a candid, wholly unrehearsed moment, Garland inadvertently created a catch phrase with staying power. These are the Google results for “southwest philly floater” as of today: 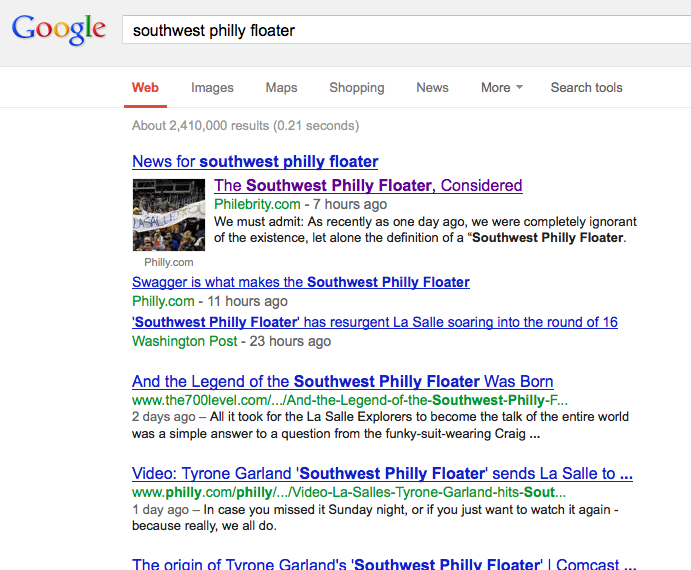 Over 2.4 million results! That’s the sort of return most marketers dream of yielding. The lesson here is that virality isn’t something that can be predicted or manufactured; it happens when the stars align, when someone lets their guard down and in the heat of the moment, makes history. But it still doesn’t mean we won’t try to predict it.